The Dream Thiems (Green Bay, WI) have been attending the Lakefront 7s since 2017 but have yet to go home with any hardware: until now. But their  path to the 2022 Men’s Social championship took an unexpected twist.

Early in the pool stage, it looked like the Dream Thiems — featuring a number of very experienced players in their squad including a former collegiate All American — might run away with the Division.

They quickly notched two comfortable wins versus the Woodsmen (31-5; Schaumburg, IL) and Goblins (33-0; Lafayette, IN).

But in the third pool match they met firm opposition. The Wolfpack (St. Paul, MN) held Dream Thiem to just 2 tries as well as scoring their own double. At the final whistle, the 12-12 draw meant both teams had a 2-0-1 record.

In the semi-finals, Dream Thiems played the first-seeded Milwaukee Barbarians (Milwaukee, WI). Three years ago, the Dream Thiems fell to the Barbarians in a hotly-contested match in the semifinals of the Men’s Social Bracket.

This summer, the Thiems got their revenge, defeating the Barbos in the same stage of the competition with a resounding 33-0 victory. 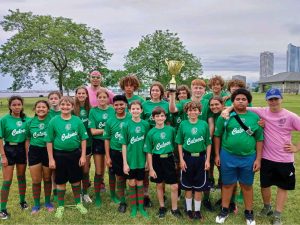